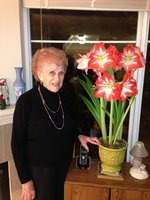 Yvonne Prevo passed away on Dec 23 at Evergreen Hospital surrounded by family. She was 102 1/2.  Yvonne was born in Caldwell, Idaho on July 29, 1915, to Amelia Spaeth and Henry Doyle, McPherson. She was the second of four children. She was proceeded in death by her husband Lowell Meade Prevo in 1964, and her son Gary Lowell Prevo in 2007.  While growing up, her father worked constructing the “Going to the Sun Highway in Glacier Park, Montana, using horse-drawn grading equipment. At a very young age Yvonne assisted her Mother cooking and serving the work crews. Yvonne won the title of Miss Caldwell while attending the College of Idaho. She married Lowell Prevo in 1938 and had many adventures riding horseback with the Canyon County Sheriff’s Posse. Lowell and Yvonne were part of Sage Acres Race Track in Huston, Idaho where Yvonne had occasion to not only be a jockey but also win the race. Unheard of by a woman at that time.  In Huston, Yvonne and Lowell had three children, Joyce, Gary and Pamela. In 1955, the family moved to Othello, Washington to farm and open Prevo Produce.  Lowell, passed away in 1964. Soon after, Yvonne became the Office Manager for Western Cold Storage in Othello where she worked until her retirement in 1990. She was a long-time member of Beta Sigma Phi and a devout member of the First Presbyterian Church. Always community spirited she volunteered at the Old Hotel Art Gallery, and took cookies and magazines to the Seniors and quite often read to them. She continued serving the elderly although she was older than most of those she comforted.  In 2009, Yvonne moved to Brittany Park an active Senior Living Facility in Woodinville, Washington. While there she participated in a myriad of activities. She moved to an assisted living facility in Mill Creek, Washington in 2015. She regularly attended the Gold Creek Church with her Grandson Matt Stewart and his wife Daniella until her death on December 23, 2017. Yvonne is survived by her Daughters Joyce Fegert of Reno, and Pamela Stewart of Woodinville. She is also survived by 9 grandchildren, 23 great grandchildren, and 20 great great grandchildren. She will be remembered by her family and those who knew her for her drive, strength and resolution along with her fun loving personality.  Services will be held Thursday, Jan 4, at 4:00 PM at Gold Creek Community Church 4326 148 St SE, Mill Creek, Wa. 98012.  Graveside services will be held Jan 5 at 1:00 at the First Presbyterian Church in Othello, Wa.