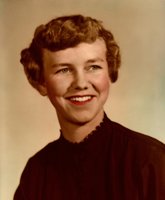 Jean Hinckley Thomson, 86, loving wife, mother, grandmother and friend passed away July 9, 2019 at Sacred Heart Hospital due to natural causes. Jean was born on March 20, 1933, in Rexburg, Idaho, to Carl Alonzo and Minnie Beck Hinckley. She attended schools in Rexburg and graduated from Madison High School. After graduation from high school, she worked as a telephone operator.

She married Doyle Thomson on November 22, 1957 in Burton, Idaho.  They made their home in Rupert, Idaho, then in 1962 moved to Washington where they have been ever since. Jean stayed home and took care of her children, but later on she worked for Fae's Books and Crafts and then Jensen Clothing. She was a social person who knew many and loved all.

Jean was an active member of the Church of Jesus Christ of Latter Day Saints.  She held various positions in the church, including: Primary Teacher, YW leader, Sunday School teacher, Secretary in the Relief Society under six presidencies, Church Librarian for many, many years as well as Ward and Stake Historian.  She enjoyed genealogy, quilting, sewing, reading, long walks in her younger years, lunch with friends, and spending time with her children and grandchildren. She will greatly be missed.

Funeral services will be held at 11:00 am, Friday, July 19, at the Othello Stake Center, 1200 East Rainier Street, Othello, Washington.

Many heartfelt thank yous to all of the nurses and doctors who took care of our mother in her final hours.