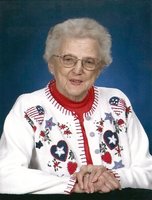 Wilma Elizabeth Tindell, 89, died peacefully Sunday 26 January 2020, surrounded by her loving family. Wilma was born on April 19, 1930, in Clarkston, WA, to Ralph G. and Nancy E. Showalter. She was raised in Lewiston Orchards, ID with her 2 brothers and 5 sisters, and was in her senior year when her family moved to Kennewick, WA. Upon graduating from High School she got her first job opportunity working at J.C. Penney which allowed her learn a lot and to get her first car, a 1948 Chevrolet Fleetline. She also worked for a time at a local store in the tool department since she loved working with her dad on things. She also worked at a hospital as an admissions clerk. In July of 1952, Wilma met Tommie Tindell at a movie theater in Kennewick while he was assigned at the USAF Radar Base in Othello, WA. That night he wrote home and told his mother that he had just met the woman he was going to marry. They married in Kennewick on July 12, 1953. Wilma was a devoted wife and mother to her family, going wherever the Air Force sent Tommie. But they always came back to the place they loved, Othello, where Tommie retired and started a new chapter in their lives. Wilma worked part time at Sears till she had the opportunity to work at Lutacaga Elementary School as a library assistant and then in the secretary position which she dearly loved. Even after retiring she still came back as a classroom Grandma to help and love on the kids. Wilma enjoyed traveling to see her sons and their families and visit friends. She was a member of the Othello First Presbyterian Church, the Eastern Star, Cub Scouts leader, Othello Senior Center, and the Order of the Amaranth, where she served as Royal Matron several times, to include with her father Ralph Showalter as Royal Patron. Her and Tommie enjoy traveling to attend Masonic programs throughout North America. Wilma truly showed love to her family and so many dear friends. She loved and cared about the people that came into her life. When she said she loved you, she meant it! She is survived by her brother Jacob and sisters Margaret, Nancy, Gladys, and Jane, her sons, Tommy Jr. and his wife Nancy of Colorado Springs, CO, David and his wife Carol of Orting, WA, grandchildren Bethany and Jeffrey, and great granddaughter Ysabel. In lieu of flowers please send Memorial donations to the Seattle Children’s Hospital through either their website (https://giveto.seattlechildrens.org/give with credit to the Buddy Andrews Guild in Memorial of Wilma Tindell) or c/o Stevens Funeral Chapel or Othello First Presbyterian Church.