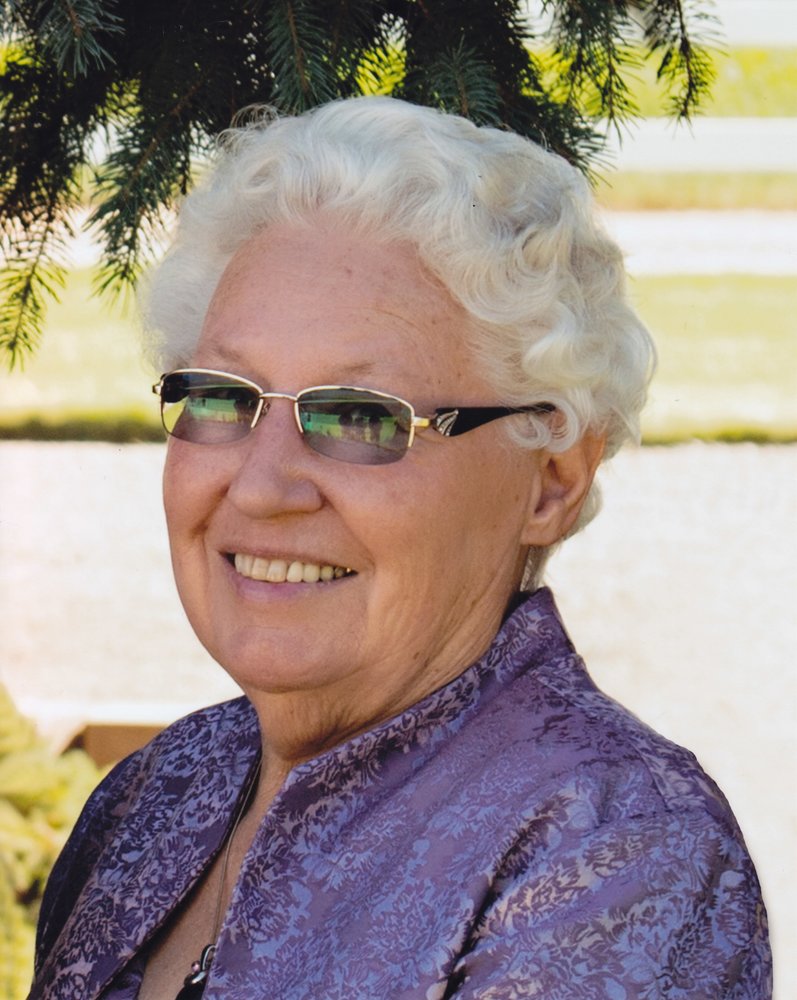 Orvalla LaVelle Hafer, 80, of Othello, Washington, passed away October 9, 2017 in Spokane, Washington.  She was born in Wallowa, Oregon November 22, 1936.  Orvalla grew up in Promise, Oregon, until the family moved to Portland when she was in the 8th grade.  She completed her education in Portland graduating from Roosevelt High School in 1954.    Orvalla married Raymond Eugene Hafer April 21, 1956.  Once the Bureau of Reclamation established water in Eastern Washington, Raymond and Orvalla moved to the Columbia Basin and began to cultivate 80 acres as their first farming commerce.  In 1963, they sold this land and moved up the road 15 miles and began the business of farming their newly purchased 320 acres, the foundation to the family owned, multi- specialty Hafer Farms of today.  Raymond and Orvalla lovingly raised four children together, and enjoyed 28 precious years of marriage until Raymond’s passing in 1984.
She devoted over 20 years gathering stories, photographs, and memorabilia of the lives and land of her childhood home in Promise.  These were the mainstay in creating nearly 40 calendars of history, eventually becoming published as “100 Years; The North Woods of Wallowa County,” Volumes 1 and 2.  She was an active member of the Othello Baptist Church, volunteered for the Sandhill Crane Festival, and was a member of the Cattlewomen’s Association.  Through her years, Orvalla participated with the Adams County Fair serving in many roles including Fair Board member, Swine Superintendent, Othello Junior Livestock Association member, 4-H Leader, and Memorial Garden Founder.  In 1995, she was a founding member of the Columbia Basin Junior Livestock Show.
As involved as Orvalla was in service to others in her greater community, her foremost passion in life was for her family.  She is survived by her children: Nathan (Jamie) Hafer of Pasco, Washington, Justin (Debra) Hafer of Othello, Washington, Randy (Diana) Hafer of Othello, Washington, and Holly (Robert) Kenner of Moses Lake, Washington, and her sister, Myrna (Robert) Journot of Wallowa, Oregon.  She also leaves behind 11 grandchildren and 16 great-grandchildren to cherish her loving memory.  She was preceded in death by her husband, Raymond Hafer, her parents, Orval and Myra Carper, and her brother, Merlin Carper.
Funeral Services were held at 10:30 a.m., Friday, October 20, 2017, at the Othello Church of the Nazarene, 835 S. 10th Avenue, Othello, Washington, A viewing preceded the service from 9:30 to 10:00 a.m. at the church.  Memorial contributions are suggested in Orvalla’s name to the Othello First Baptist Church for Youth Camp Sponsorship.  To leave an online condolence visit www.stevensfc.com.

Share Your Memory of
Orvalla
Upload Your Memory View All Memories
Be the first to upload a memory!
Share A Memory
Plant a Tree