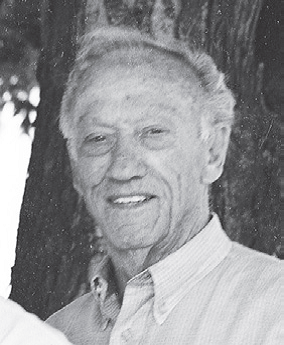 Bill Schlagel passed away July 26, 2018, at his home in Othello, Washington with his family by his side.  He was born January 22, 1929 in Yakima, Washington to Walter and Alma (Hollingsworth) Schlagel. He graduated from Yakima High School in 1948, where he was in all-state selection for football and baseball his senior year. He then graduated from Yakima Valley College in 1950 and went on to serve in the Coast Guard. Bill met his wife Joanna in 1953. On Nov. 27, 1954, they were married in Yakima, where they lived until they moved to Othello in 1957 where they made their home for 51 years. They raised three children, Greg, Terri, and Donnie. In 1954, Bill started selling sprinkler irrigation equipment for various companies until his retirement in 1995. He also worked in land development, and continued running an orchard after retiring from irrigation sales. He served as the Adams County commissioner from 1992 to 2000. He was an avid water skier, loved to go camping, and follow all his grandchildren’s sports ctivities. He loved all the holidays when the entire family would get together and spend time with each other. He is survived by his children Greg (Ruthann) Schlagel, Terri (Greg) Couette, and Donald (Frances) Schlagel; grandchildren and great grandchildren: Jason, Leah, and their son Jase, Kylee and her children Cyris, Olyviah, and Emmitt, Devan, Kennady  Schlagel,  Alex, Nina, Heather, Josh Couette, Joseph Fasching and his daughter Scarlett, Justin, Brandon, and Sara Schlagel; numerous nieces and nephews, his in-laws, and his companion Dorothy Schoeppach. His wife, parents, and two brothers preceded him in death. A final visitation will be held at Stevens Funeral Chapel on Wednesday, August 1 from 10 am to 7 pm. A service will be held Thursday, August 2 at the Othello Nazarene Church at noon. In lieu of flowers, donations can be made to cancer research or any non-profits supporting cancer.

Share Your Memory of
Bill
Upload Your Memory View All Memories
Be the first to upload a memory!
Share A Memory
Plant a Tree