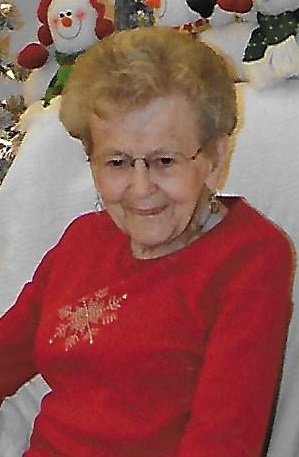 On March 6, 2019 Shirley Joan (Wright) Yager left this earth to join her Lord and her husband in Heaven. Shirley was born in Walla Walla, WA on February 23, 1921 to P.W. and Lola Wright. Along with her 3 brothers, she was raised on a farm near Lind, WA. She was a graduate of Lind High School. On September 23, 1939 she married Harvey Yager and would spend her days as a farmer’s wife on the farm until they retired and moved to their new home in Othello. She was a member of Pilgrim Lutheran Church. Shirley enjoyed playing golf with her friends, making quilts at church with her quilting group, traveling to China, Tahiti, Hawaii and other locations, as well as fishing trips to Twin Lakes and the coast. She also enjoyed many gatherings with her beloved family. She leaves behind 3 children: Joan Lawson of Moses Lake, Mary Ann (Larry) Kirkpatrick, Othello and Craig (Julie) Yager of Connell; grandchildren: Jim (Kathy) Rollins, Jay (Carmen) Rollins, Tami Sandusky, Mike Rollins, Lynn (Criss) Wahl, Terry (Amy) Kirkpatrick, Lonnie (Sue) Kirkpatrick, Amy Farrell, Rob (Patricia) Yager, Jake (Kelli) Yager, TJ Yager and Willie (Hannah) Yager plus 30 great grandchildren and 33 great-great grandchildren. Shirley was preceded in death by her husband Harvey, parents P.W. and Lola Wright, brothers: Bob, Don, Dean and Duane, one grandson, 1 great grandson and 2 great- great granddaughters. Shirley will be missed by her many other friends and relatives. A celebration of her life will be held at Pilgrim Lutheran Church in Othello on Saturday March 16, 2019 at 11:00 AM. Memorials may be made to the charity of your choice. Condolences may be left at www.stevensfc.com Kick back and relax Mom – you’ve certainly earned it.

Share Your Memory of
Shirley
Upload Your Memory View All Memories
Be the first to upload a memory!
Share A Memory
Plant a Tree