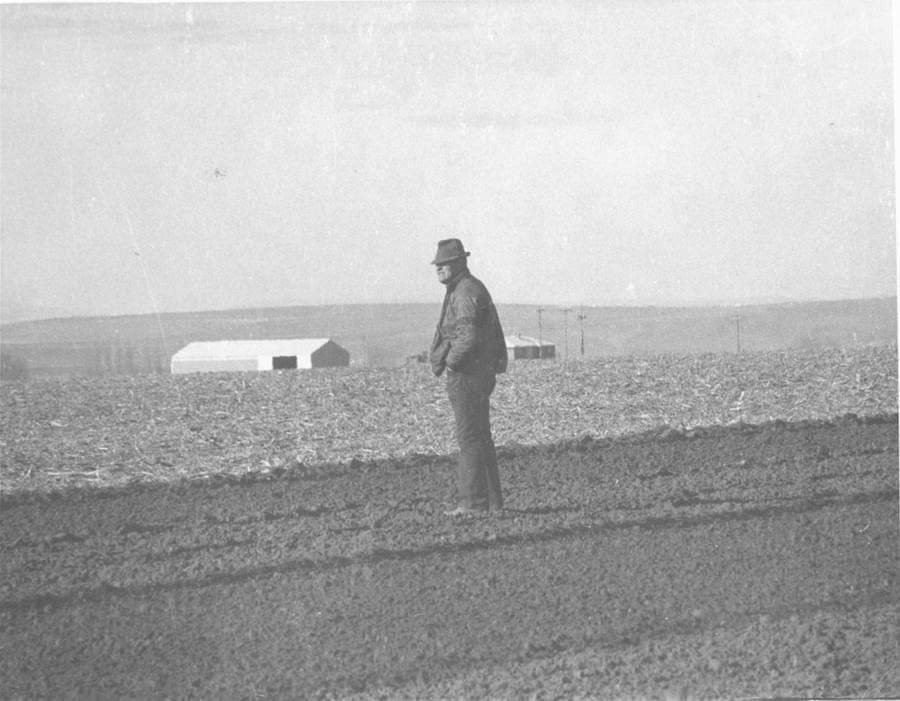 He was born February 16, 1927 in Sugar City, ID to David Hatler Gearheart and Sarah Arminta “Minnie” Haynes.  He was the fourth of six children.

Shortly after, the family moved to Rigby, ID then to Blackfoot, ID for a couple of years before moving to Chinook, MT where Hatler assumed the role as the supervisor of the U&I Sugar factory.  Lynn was in the 2nd grade and, at that time, met many friends he would have for the rest of his life, including, his most important of relationships, with Hazel Brown, the daughter of the town’s dairy farmer.

For the next 84 years they were “Len & Hazel”, including 68 years of marriage.

Lynn was industrious even at an early age. While growing up in the depression he and his brother started entrepreneurial endeavors such as mowing lawns (pushing the mower together), shoveling snow, and growing/selling vegetables to the local grocery store.

At age 17 he enlisted in the United States Navy in 1945 to join the war effort of WWII.  He volunteered and was training to be a corpsman to eventually be assigned to the US Marines as a battlefield corpsman.  He would have been assigned to the First Marine Division which would have been the first group to attack the Japanese homeland.  Official government estimates were that the Division would face 100% casualties.   Luckily, the war ended, and he was discharged in 1947 and he returned to Chinook.

Ten years ago, his family bought him a ball cap with the US Navy insignia on the front and WWII Vet embroidered on the back.  Over the years, hundreds of people would stop him on the street and thank him for his service and often gave him free or discounted goods and services.  He graciously thanked them and often said he accepted their thanks in behalf of his friends who never made it home from the war.   He loved his country and counted it an honor to serve in the military.

He and his brother renewed their working relationship and formed a partnership starting in Sunnyside that ran farming and other ag-related endeavors for the next 35 years.

In 1958 they moved the farming operation to the Othello where he and Hazel raised their children.

Lynn and Hazel moved to the Wahluke area in 1985 where they had their own farming and grain brokerage business until Lynn retired and sold the business in 2003.

They moved to Richland in 2007.  Due to Hazel’s health issues, they moved to Parkview Estates in Kennewick, where they both received excellent care from the staff there.

Lynn obtained his pilot’s license and over the years owned several private planes. He loved to fly, and family members knew that if he were in a bad mood, it was time to “go up”.

In business he had a reputation of being a straight-shooter and ran his businesses with honesty and integrity.  He often said, “Your word is your bond” and “The other guy deserves to get a fair deal too.”

His penchant for hard work and quality of work was legendary and he taught the principle to his kids and grandkids.  “If you’re going to do the job, do it right” was his common refrain.

Lynn was a lifelong member of The Church of Jesus Christ of Latter-day Saints and served in many positions.  He most enjoyed teaching teenagers in Sunday School where his mix of sincere talk and earnest admonition was respected and loved.   His class members routinely expressed their appreciation for his love for them and his long-term positive influence on them.

The family would like to express sincere gratitude to Dr. Glen Zuroske of Desert Cardiology who used his knowledge and skills to add many meaningful years to Lynn’s life.    Special thanks to the doctors and nurses of Kadlec during the last two days of his life. Their care and sensitivity made him comfortable and provided solace to his family.

In lieu of flowers, the family suggests donations to St. Labre Indian School, Tongue River Rd., Ashland, MT  59003.   For those wishing to send memories and condolences to the family, please go to www.stevensfc.com

To plant a beautiful memorial tree in memory of Lynn Gearheart, please visit our Tree Store

Share Your Memory of
Lynn
Upload Your Memory View All Memories
Be the first to upload a memory!
Share A Memory
Plant a Tree