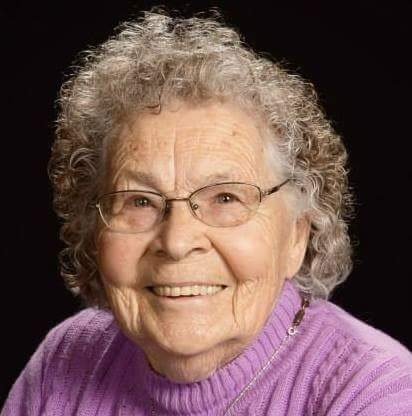 Mary Edith Paul was received into the arms of her Savior just before midnight on Friday, May 15, 2020. She lived 99 strong, healthy years loving Jesus and all the people around her. She passed away in her Othello home attended by her daughter, Dianna Jones, and three grandchildren: Cheryl, Kim, and Leroy. Mary Edith Meng was born on September 22, 1920 in Saskatchewan, Canada to Harvey and Mabel Meng. She had 2 brothers both of whom have preceded her in death. Mary grew up on Whidbey Island, Washington where she owned a beauty salon. Mary met Solomon Delbert Besherse while he was stationed at Ft. Casey during WWII. They were married in the Methodist Church in Coupeville, Washington on October 12 1941 and had 4 children, Dianna (of Othello, WA), Lawrence (“Larry” of Othello, WA), Bernie (of Panama), and James (“Jim” of Germansen Landing, B.C. Canada), all of whom survive Mary. The family moved from Sedro Woolley to homestead in Othello, Washington in 1954 when the Columbia Basin was being developed. They planted an apple orchard, Sunshine Fruit Farm, which they operated till 1983. Between 1983 and Solomon Delbert’s passing in 1987, Mary and Delbert traveled and fished B.C. Canada, Alaska, and the US where many cousins, aunts, and uncles lived. Mary Edith Besherse married Harry Donald Rolph of Moses Lake on August 11, 1990. Don passed away October 27, 1994. On March 10, 1995, she married James I Paul of Mt Vernon, WA. The two were active members of the Othello Nazarene Church and kept busy with gardening and home improvement projects. Jim passed away May 20, 2015. Mary loved to sew, go to yard sales, have family around, and travel (including a cruise to Alaska with the Gaither gospel singers in her 98th year). She collected dolls for whom she crocheted clothes. She worshiped God with her whole heart and was a shining beacon of love to her church, community, and family. Mary is survived by relatives coast to coast from Canada to South America including her 4 children, 11 nieces and nephews, 21 grandchildren, 47 great-grandchildren, and 17 great-great-grandchildren. The youngest, Oliver Brock Lee, was born on May 15, 2020, just hours before Mary’s passing. She is preceded in death by three husbands and two great grandsons, Shane Besherse (Aug 1990) and Austin Luna (Oct 31, 1995 - Sept 10, 2002). Mary will be laid to rest at Bess Hampton Memorial Gardens in Othello on Friday May 22, 2020 at 2:00 pm after a short viewing at Stevens Funeral Home on 7th Ave. You are also invited to a memorial service on September 19, 2020 from 4:00-6:00 pm at the Othello Nazarene Church. The date was selected to coincide with her 100th birthday celebration.
To plant a beautiful memorial tree in memory of Mary Paul, please visit our Tree Store
Friday
22
May

Share Your Memory of
Mary
Upload Your Memory View All Memories
Be the first to upload a memory!
Share A Memory
Plant a Tree