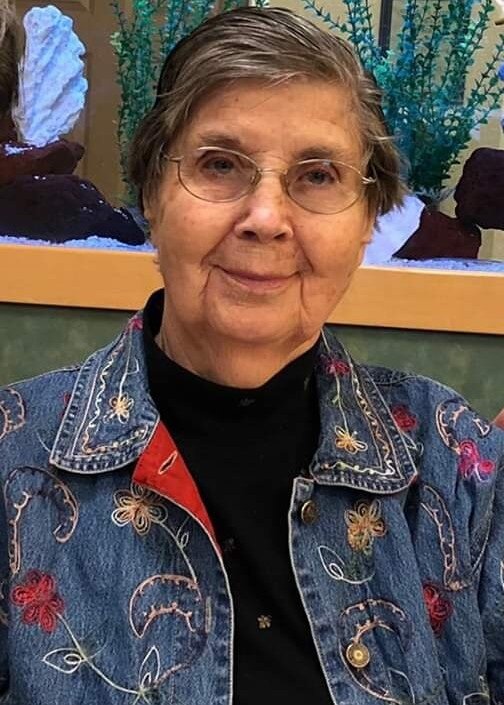 Long-time former Othello resident, Jeanne Lyda, died on Jan. 16, 2002, in Norman, OK, after recently locating there to be with family. Jeanne was born in Roundup, MT on Jan. 28, 1928, and was 12 days short of her 94th birthday. As a toddler, Jeanne’s family moved to Buhl, Idaho to homestead a farm in 1934. She was the youngest of 6 children, 3 brothers and 2 sisters who have all predeceased her. Her husband, Tom Lyda, was the former Othello Schools Superintendent from 1968 to 1977. Together, they owned Lyda Ridgeway Farms and Orchards in Othello after Tom’s retirement in 1977. Upon graduation from Buhl High School in 1947, she enrolled at the College of Idaho, in Caldwell Idaho. It was there she met her future husband and soulmate, Thomas Benjamin “Budd” Lyda, when he asked if he could walk her across campus while discussing the history class they were in together. She would later say, “he was the smartest guy in class and sat upfront. I never did figure out how he knew me or even saw me as I sat at the back of the class!” Jeanne graduated in 1951, with a degree in Elementary Education, after taking a year off to nurse her sick mother in Buhl. In the meantime, she and Tom became engaged over Thanksgiving and married on June 1, 1952. She recalled, “it was a very hot day of 105* and the church had no air conditioning…but that didn’t matter as their life adventures were only beginning.” The couple spent the first 3 months of married life at Ft. Sam Houston, San Antonio TX while Tom finished his stint in the Army. They then traveled to Kennewick WA, where Jeanne was a 5th-grade teacher and Tom a high school history teacher and baseball coach. Next stop for the duo teachers, was to Morton WA, where their eldest daughter Kathy was born in 1956. Tom was tapped for a principalship at Richland High School, Richland, WA while they were out on a horse posse ride with friends and the sheriff had to track them down by horseback to tell them of their next career move. While in Richland WA, two more family members were added: daughter Sharon in 1963 and son Tom in 1965. Jeanne stayed active with the growing family at home while participating in church life, Eastern Star, and was a very proficient bowler in the ladies league. She was also a member of two ladies' singing groups and substitute taught in the elementary schools in Richland. Another career move for Tom came in 1968, to the superintendent position in Othello WA. Jeanne loaded up the family in the station wagon with Tom driving a beatup 4 wheel drive Willies jeep, pulling a horse trailer with all their belongings to their new home in Othello. Jeanne was a very active community member in Othello: long time member of Othello Christian Church, helped start the Othello Choral and Orchestra Society, participated in Othello Eastern Star, Othello chapter of the Seattle Children’s Orthopedic Guild, church choral director, and later the church organist for over 30 years at Othello Christian Church, singer in the annual Choral Society Christmas musical, Rotarian Wife, substitute teacher in the Othello school system, co-owner of Lyda Ridgeway Ranch and Orchards, and owner of the Othello Christian Bookstore. She sang in two ladies singing groups which were quite popular within the community during the ’70s and early ’80s. She “planted” the seed money for the Othello Christian Church Bell ringers, who to this day, continue to give concerts to the delight and enjoyment of the community. Jeanne is preceded in death by her beloved husband Tom (2007, married 55 years). She is survived by her daughter, Kathy Lyda (Mark) of Blanchard, OK, daughter Sharon Lyda Dunphy, Spokane WA, and son Tom S. Lyda (Lisa) in Norman, OK. Grandchildren, Sarah Lyda Hluboky (Daniel), Phoenix, AZ, Jacob Lyda Hluboky, Blanchard OK, Paige Culnane (Jaron), Spokane Valley WA, Chase Dunhpy, Spokane WA. Carson, Grant, and Bennett Lyda of Norman OK, and two great-grandchildren, Rose and Ella Culnane of Spokane Valley WA. She is also survived by her brother and sister-in-law, Hap and Julia Lyda, Southlake TX, and numerous nieces and nephews. In lieu of flowers, please make donations to the Othello Christian Church Bell Ringers fund, PO Box 432, Othello WA 99344
To plant a beautiful memorial tree in memory of Jeanne Lyda, please visit our Tree Store

Share Your Memory of
Jeanne
Upload Your Memory View All Memories
Be the first to upload a memory!
Share A Memory
Plant a Tree